The Future Shape of Luxury 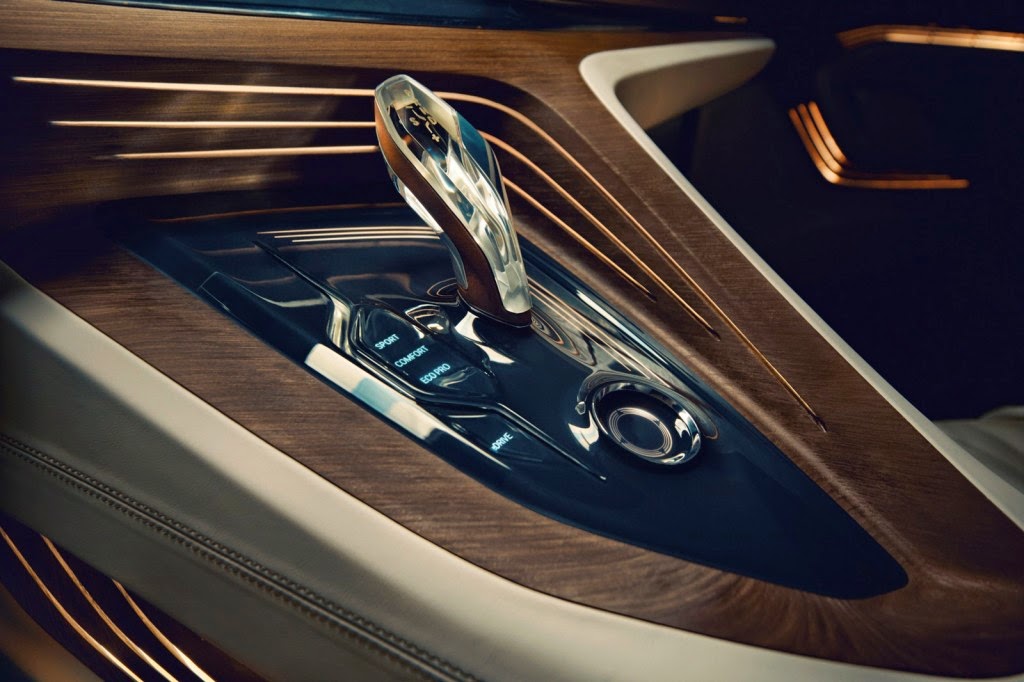 Once upon a time, automotive luxury was rare, readily recognizable and clearly defined by extravagant styling, hand craftsmanship and great swaths of impeccably-stitched leather and wood polished to a jewel-like gleam.  Some lovely pieces of art on wheels have been created in this tradition… and continue to be.  Now, however, technology has crashed the club and the small but exquisite garage that was once sufficient to contain them all has been transformed into a construction site...

New rooms, wings and exhibition halls are being added at a dizzying rate.  On-board computers, navigation systems, cameras that can see at night and around corners, cars that parallel park themselves, cars that drive themselves in bumper-to-bumper traffic, hybrids, diesels and electric cars.

All the traditional luxury cars now have various combinations of these things packed within their still-extravagant styling, but BMW has done some serious soul-searching into the new shapes, textures and functions of luxury in tomorrow's cars, and has come up with the Vision Future Luxury, a future-lux concept making its debut at the 2014 Beijing Auto Show. 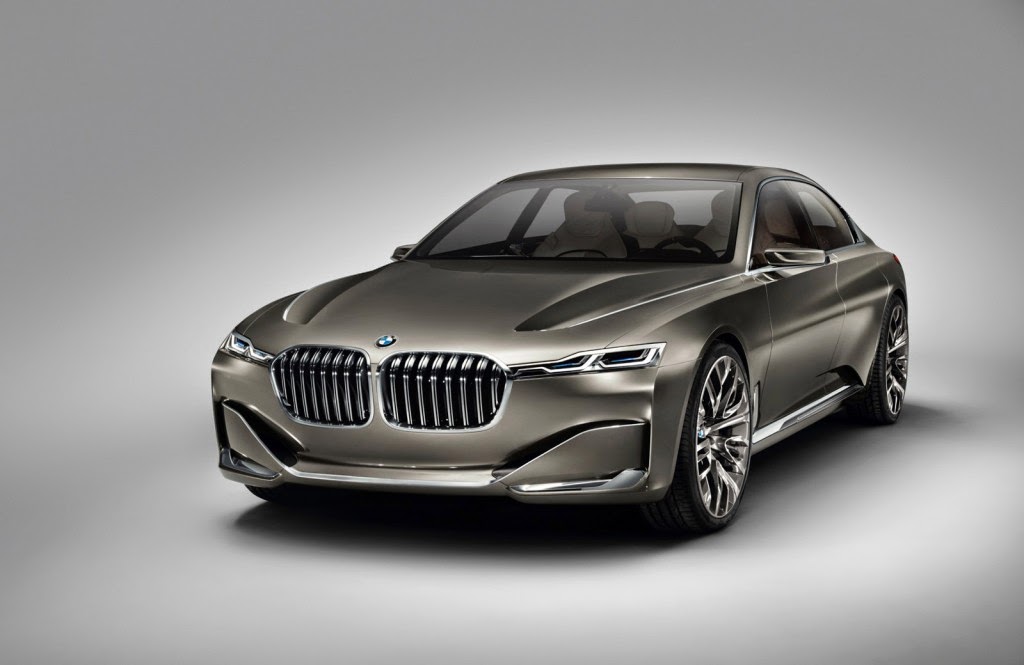 It packs enough technologies, premium materials and innovations to suggest – and make you devoutly hope – that this is an advance look at a future BMW flagship… possibly the rumored 9-Series.  The Vision Future Luxury concept is an evolution of the look first presented on last year’s Gran Lusso Coupé, a collaboration between BMW and legendary Italian design house Pininfarina.  The front is dominated by the car’s grille, set with a pair of slit-like laser headlights, below which sit a pair of air curtains. 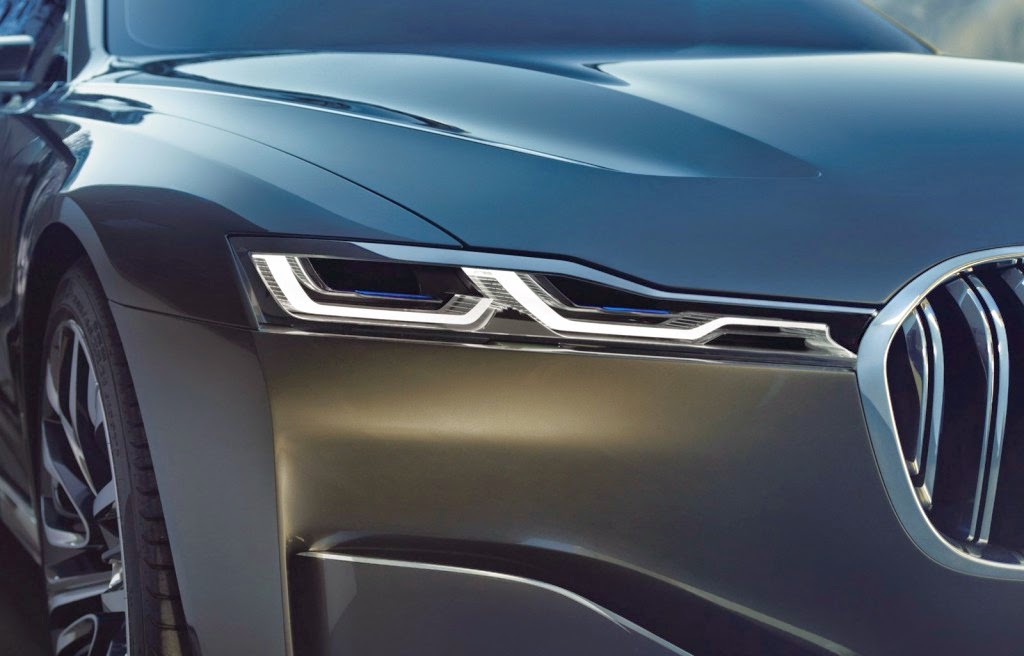 Toward the rear, a coupe-like profile and sloping trunk lid significantly reduce aerodynamic drag and work in conjunction with sculpted exterior surfaces that help channel air.  Other elements include an air breather system at the rear of the front wheel arches, a C-pillar with internal air channeling, and openings in the rear apron which vent air from the rear wheel arches. The final touch is organic LED (OLED) elements for the tail-lights that pave the way for a completely new treatment of the typical BMW L-shaped lights. 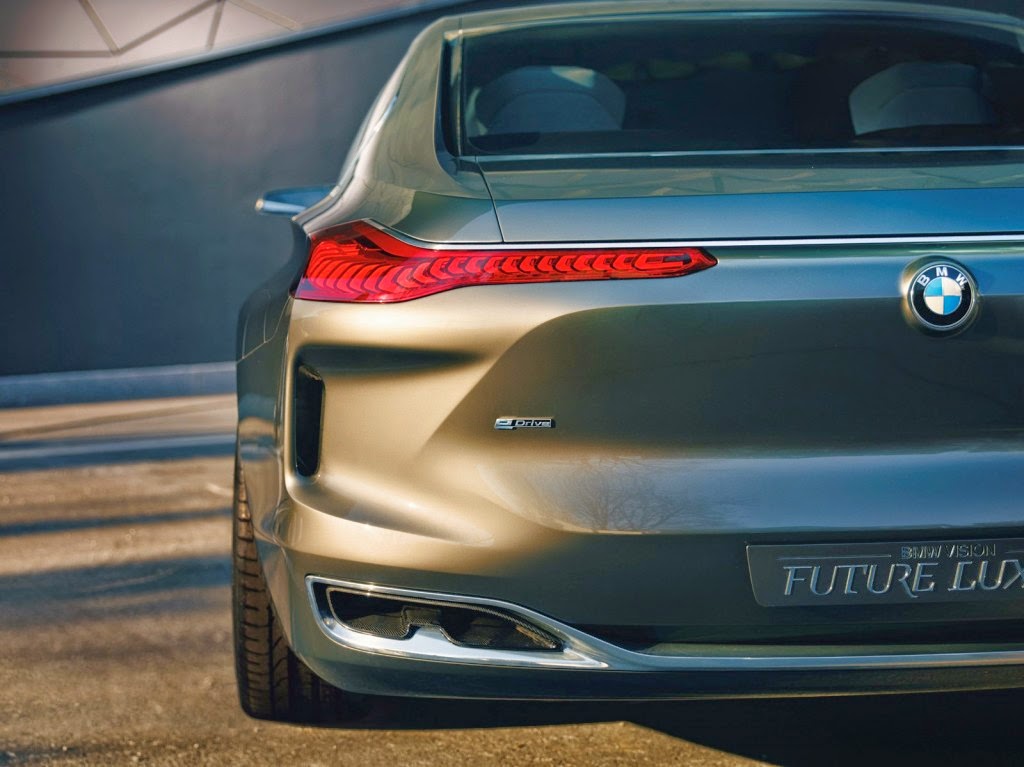 OLEDs consist of wafer-thin organic semiconductor layers positioned between two electrodes. The light-emitting polymer layer is roughly 400 times thinner than a human hair and does not require reflectors in order to produce the desired broad light dispersion, thus they can open up completely new ways of using light in and around the vehicle.

The Vision Future Luxury has been developed using lightweight principles originally developed for its eco-friendly i3 and i8 electric vehicles, with carbon fiber playing a key role in the construction of the concept. The lightweight stuff is visible in the doors, under the seats and with the shortened B-pillar.  Carbon construction allows the seat frames to be integrated into the load-bearing structure and coach-style rear-opening back doors provide a wide opening for passengers getting into and out of the back seat. 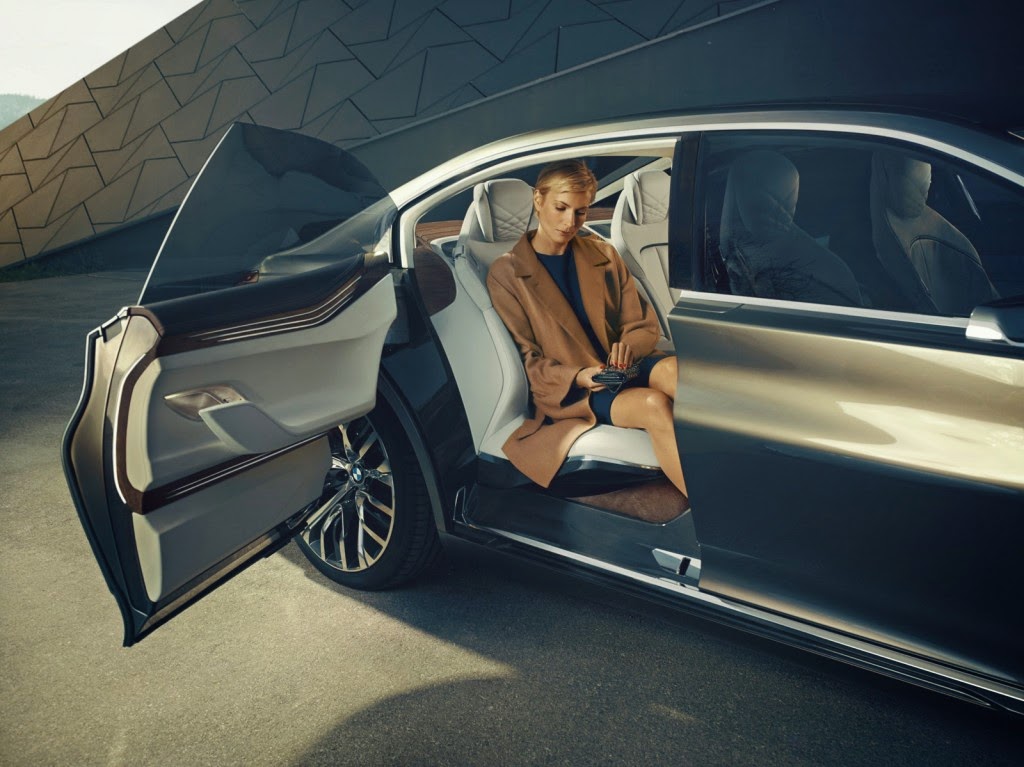 Further expressions of innovative design include a layered composite structure.  In the cabin, for example, an initial base layer of fine carbon fabric is followed by a functional level featuring user interface components, control and display interfaces and lighting functions, which in turn is followed by a further structural, load-bearing layer of aluminum for additional strength. Finally, the top layers comprise the premium materials one expects in a luxury car such as wood and leather.  Specific materials found in the Vision Future Luxury concept include aniline leather, lime wood and silk carpet. 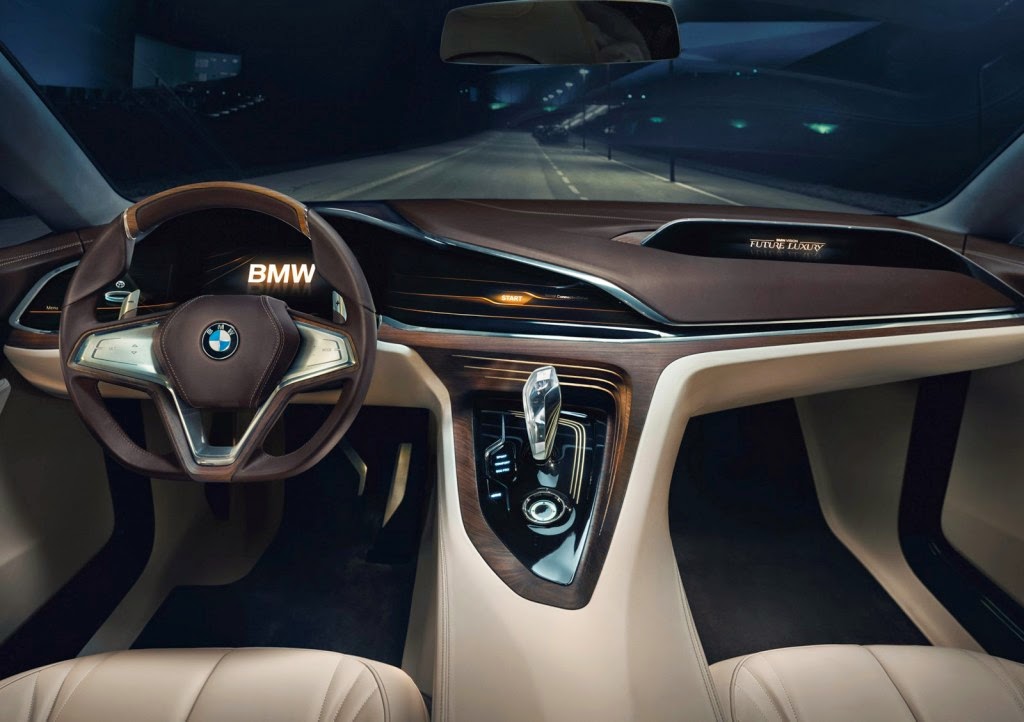 Fabulous car, but as the old saying goes, "There's many a slip 'twixt the cup and the lip."  Which means that concept cars that get you excited at the car show tend to get watered down on their way from the drawing board to the assembly line.   This tendency toward conservatism is the inevitable result of the massive costs involved in designing and producing a car… and in fixing any mistakes you make the first time around.  Hence the power of focus groups.

But I remember a conversation with legendary designer Jack Telnack, the man responsible for the ground-breaking styling of the 'jellybean' Ford Taurus and Mercury Sable that made their debuts in 1985 as 1986 models.  The shape was quite radical for the time, particularly from a major manufacturer, and when I asked him about how he felt when people criticized a car he (along with many others… there were focus groups even back then), his reply (paraphrased here) stuck with me.  "If people love your design right out of the box, you're in trouble.  You're behind the curve.  You want them to be shocked by it and take some time getting used to it.  That's when you know you've gone just far enough."

And that would be my assessment and advice to BMW: give it a new name, but build the Vision Future Luxury in as close to its current form as possible… it's just far enough. 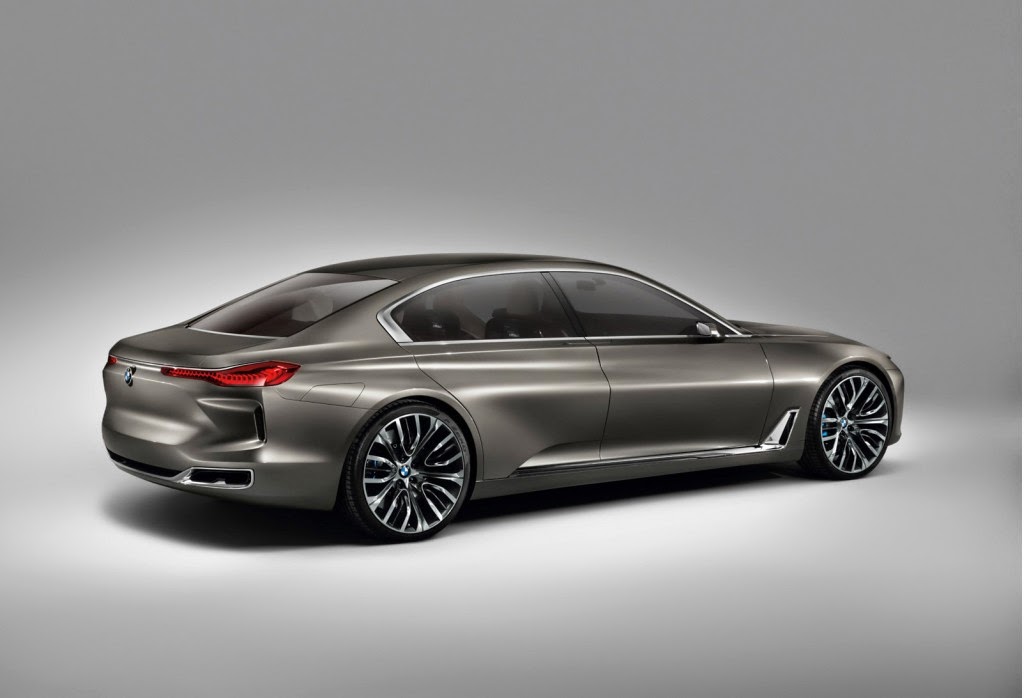 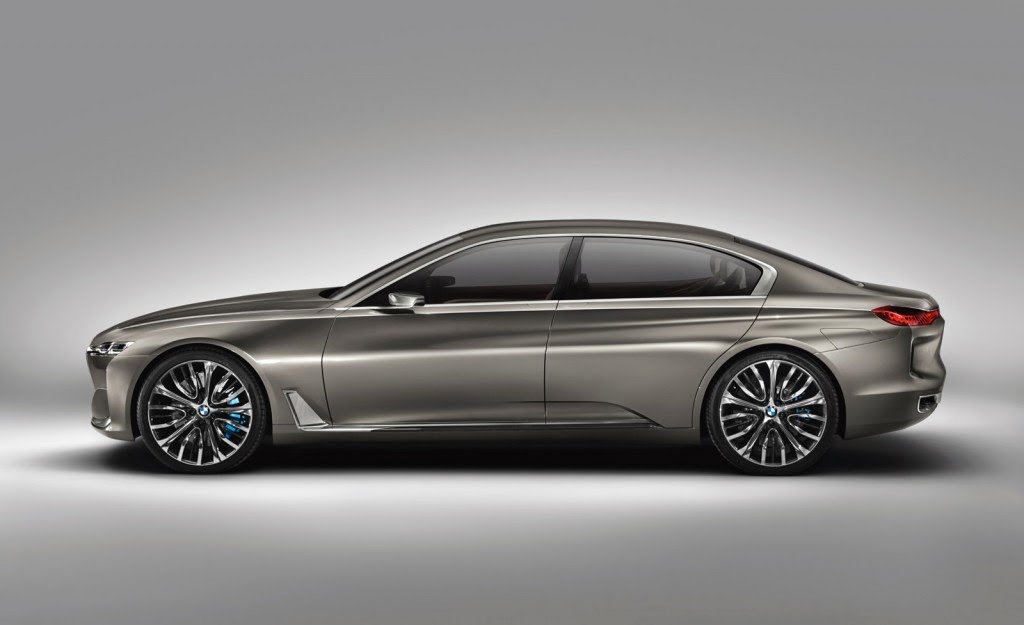 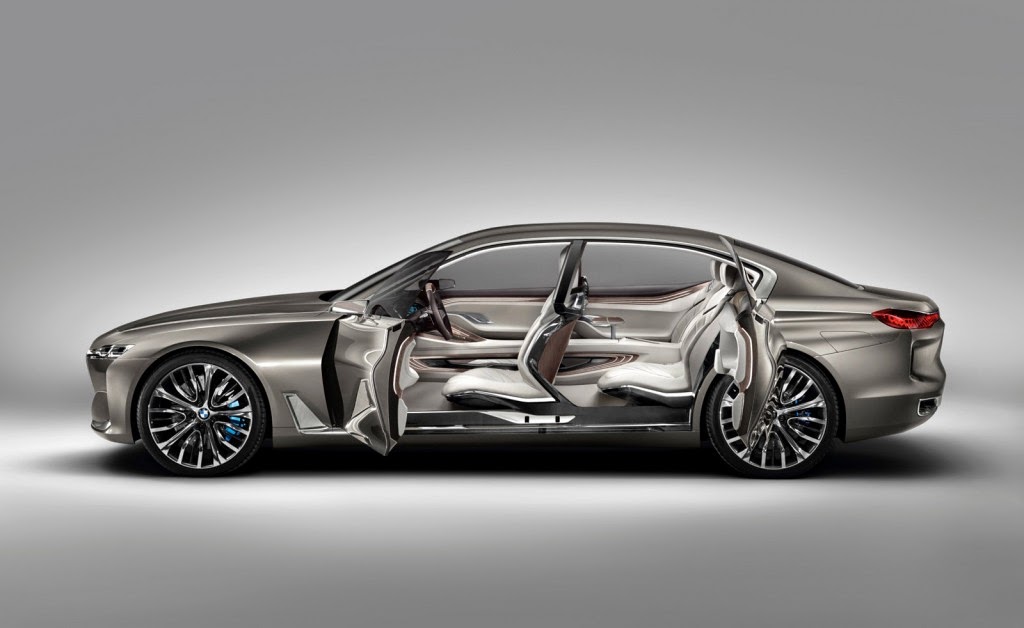 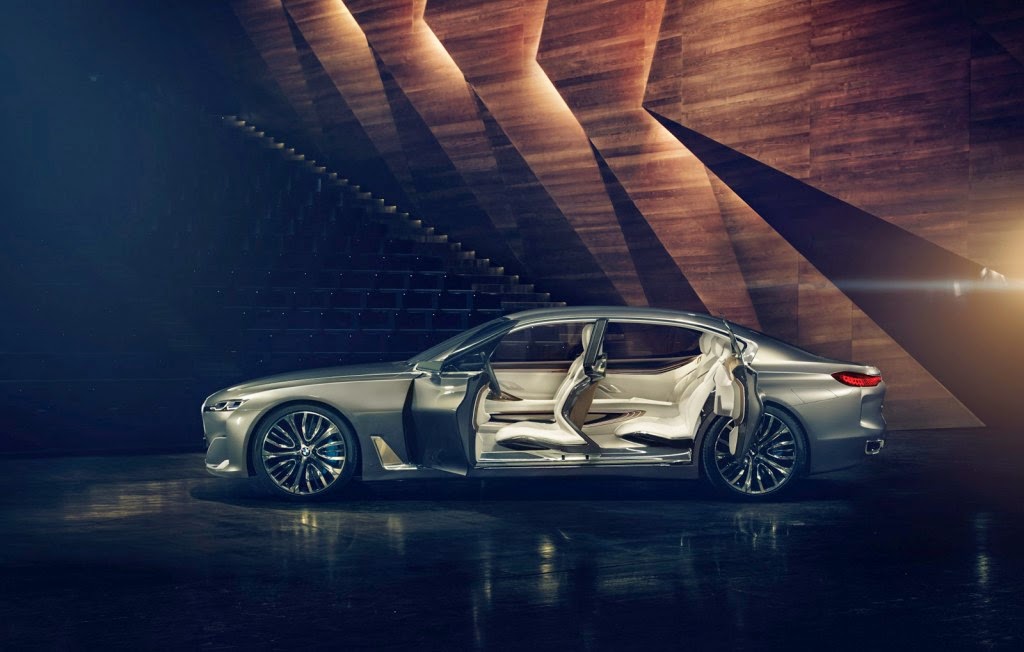 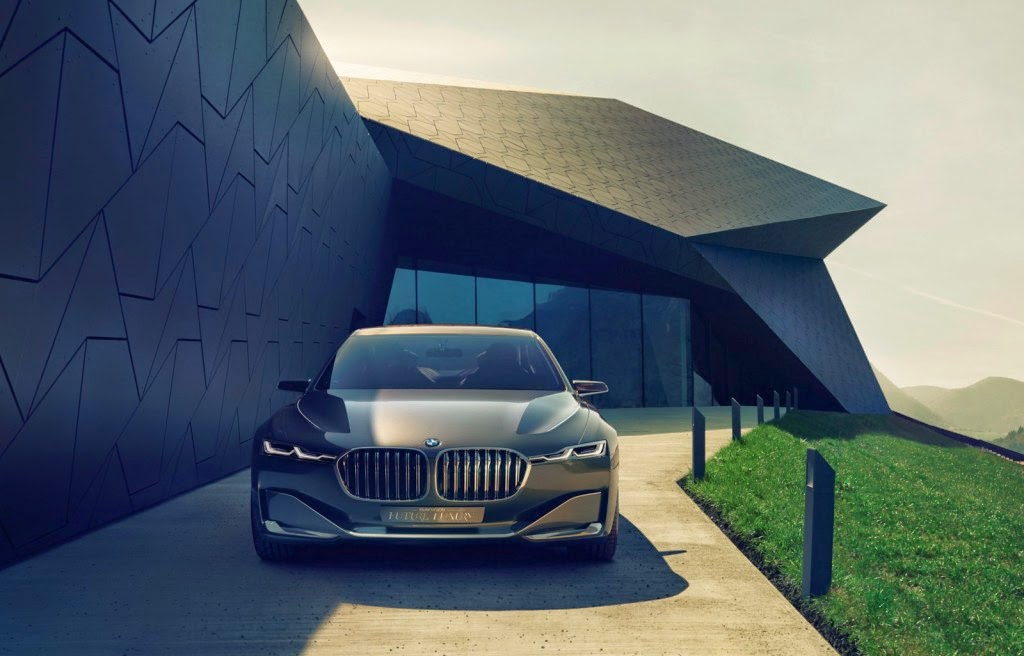 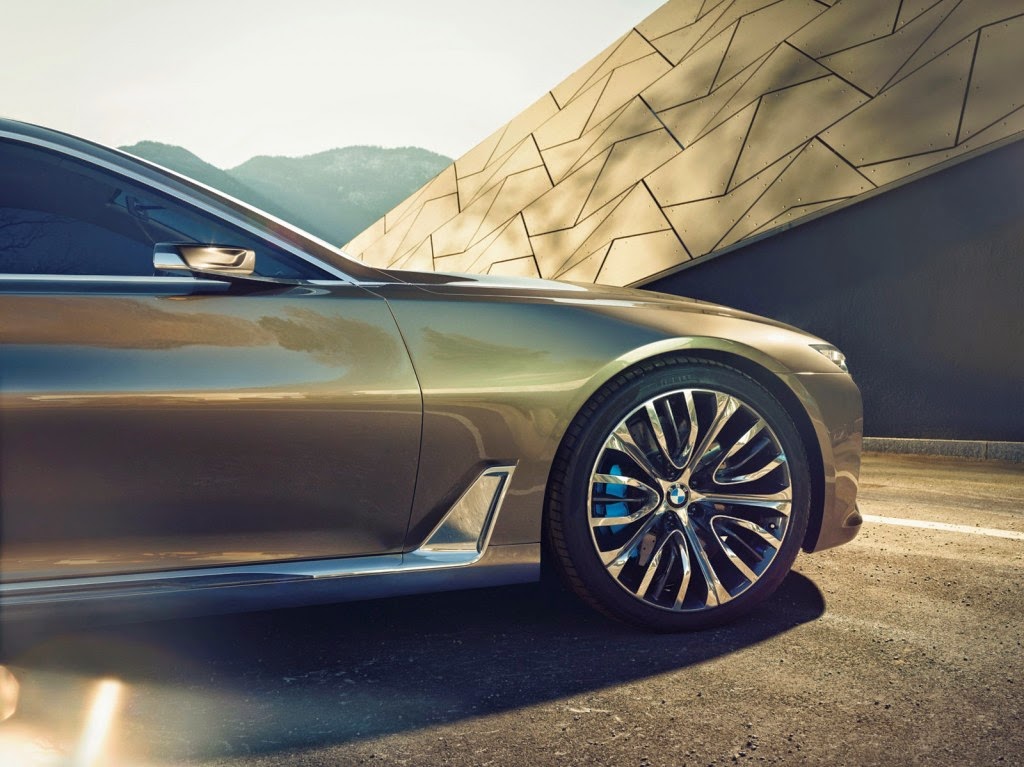 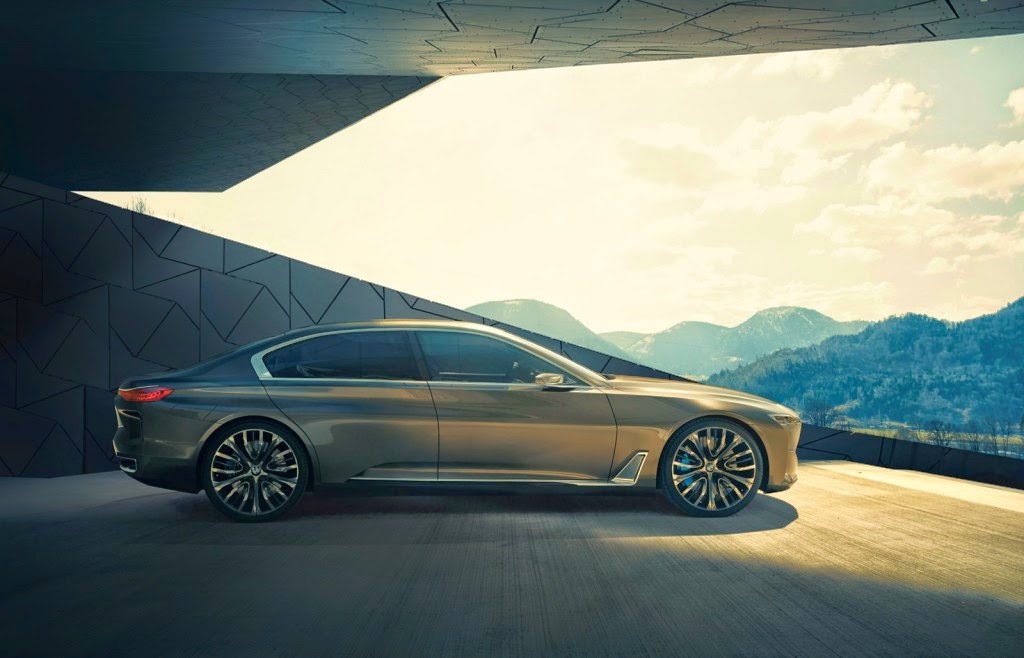 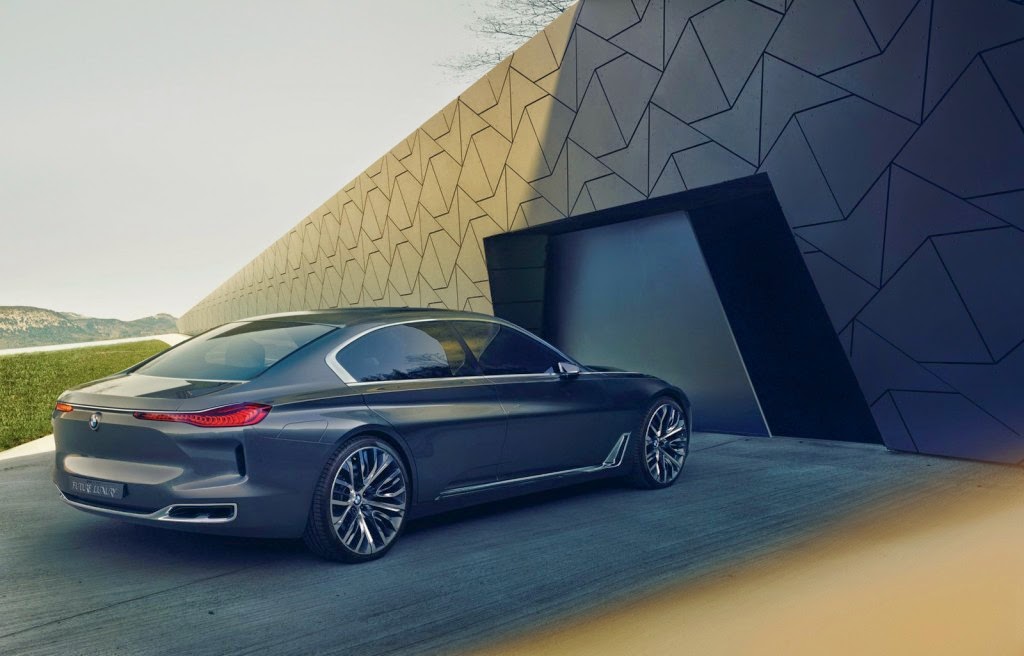 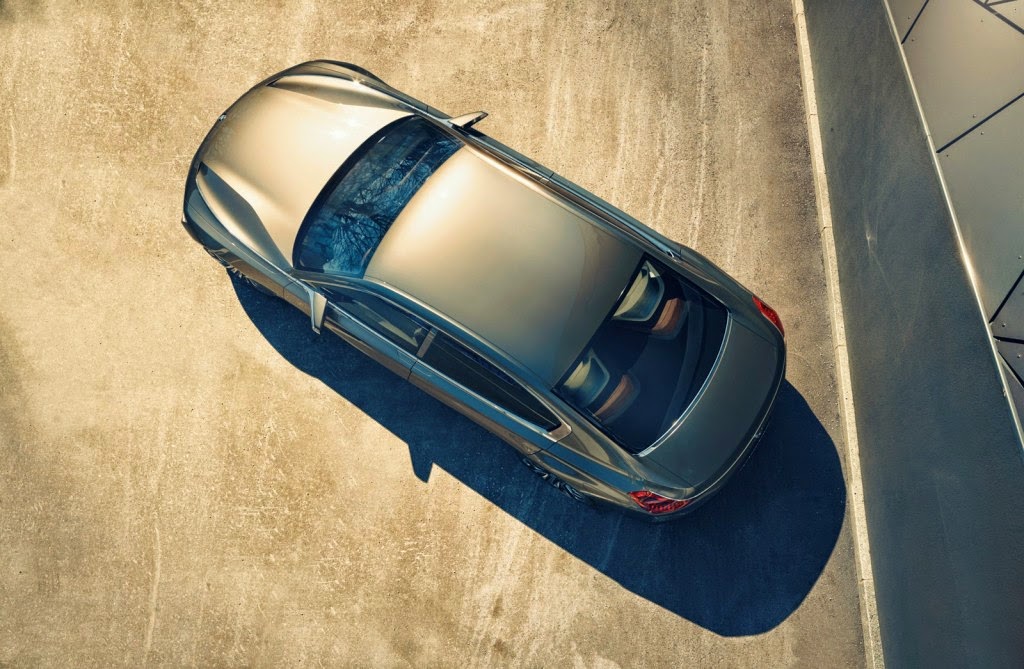 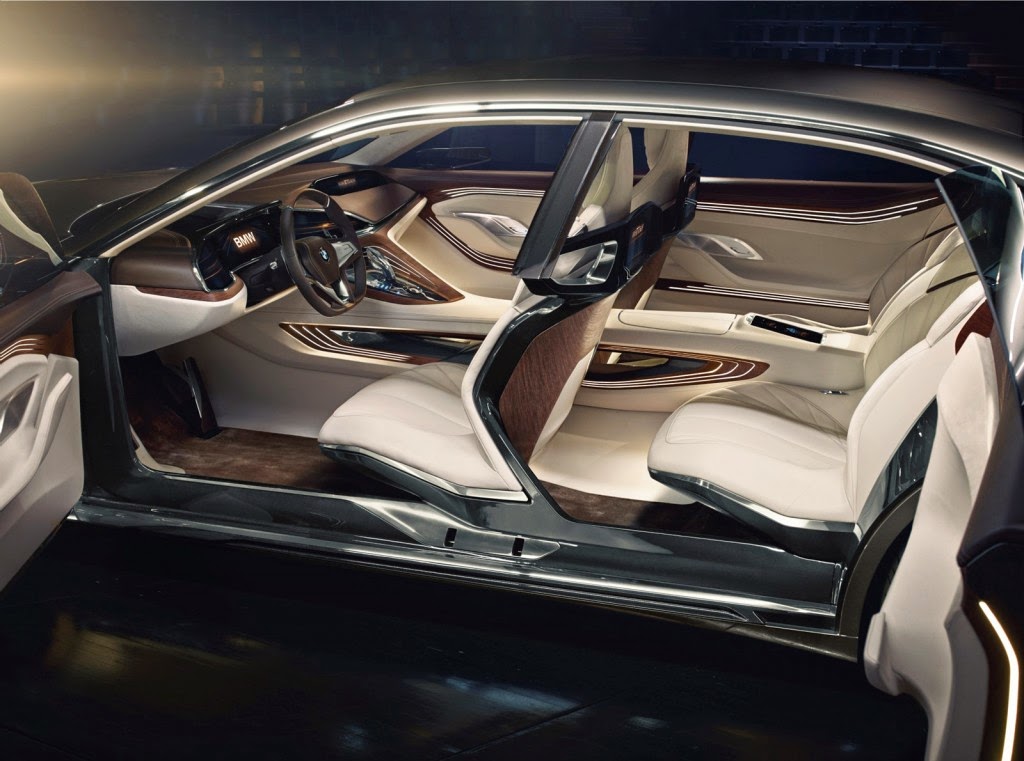 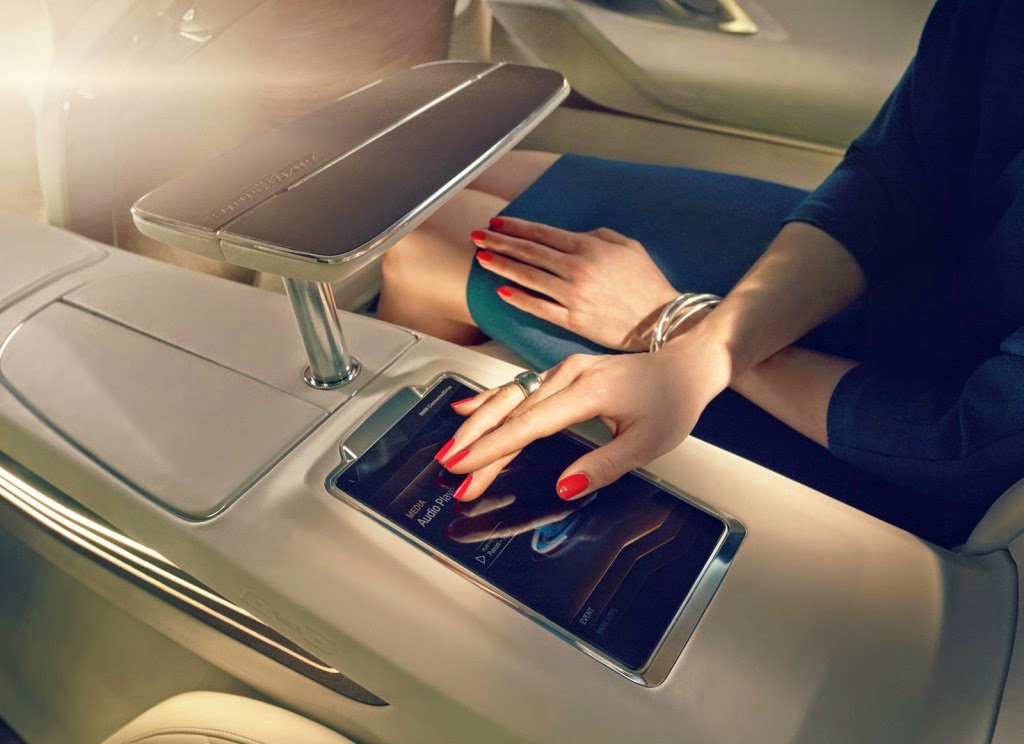 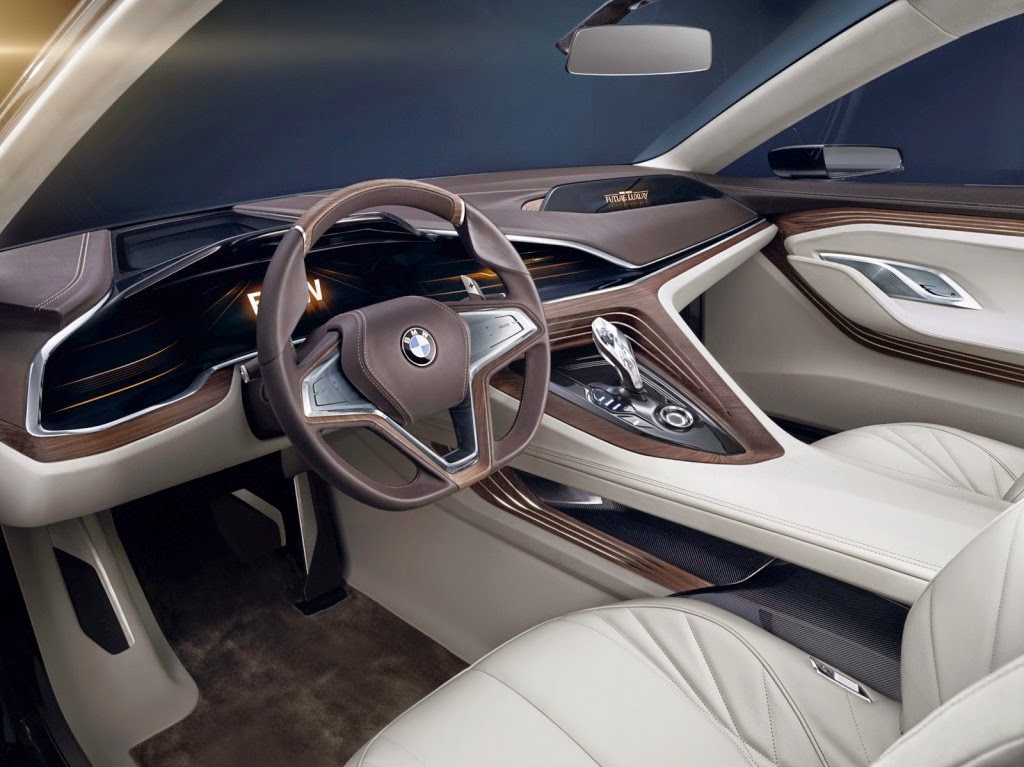 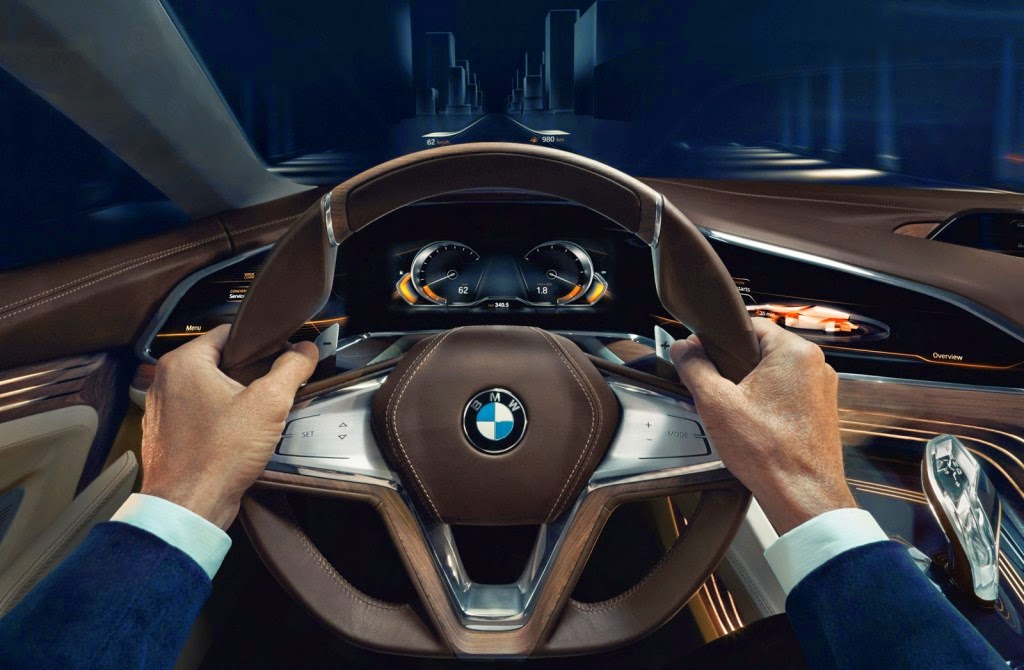 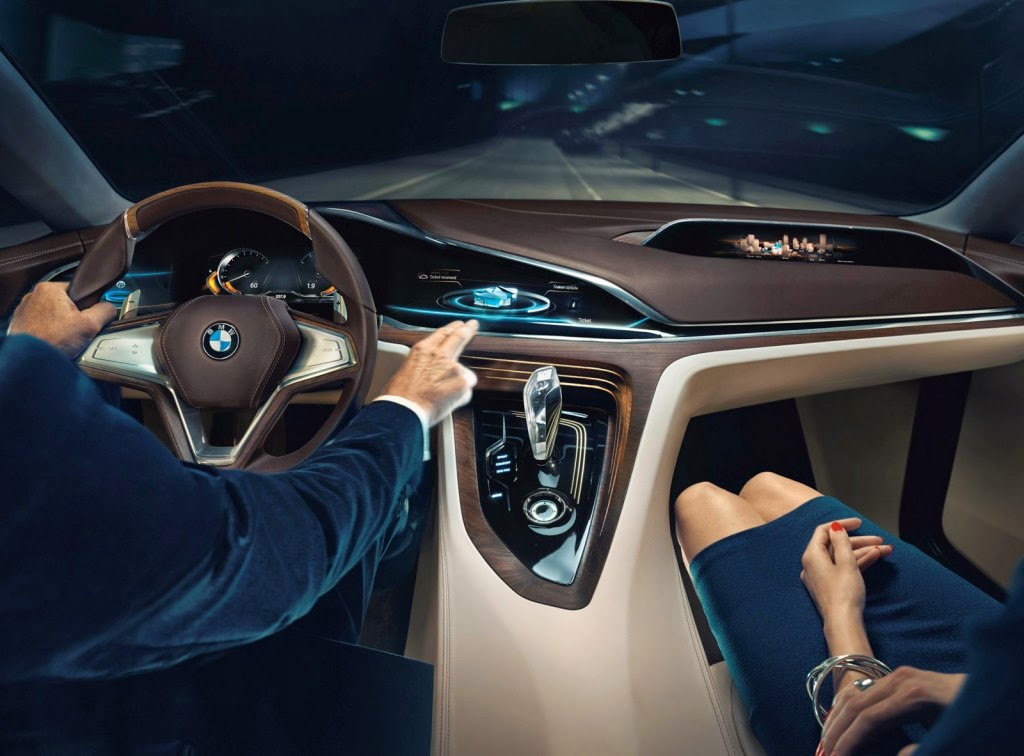 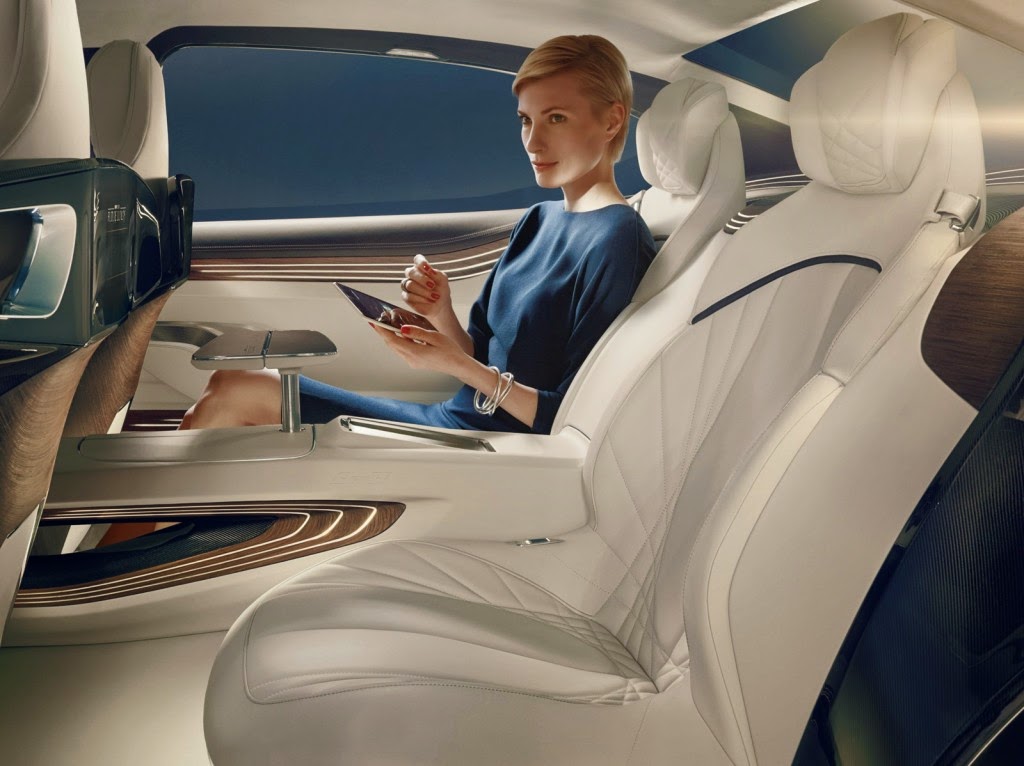 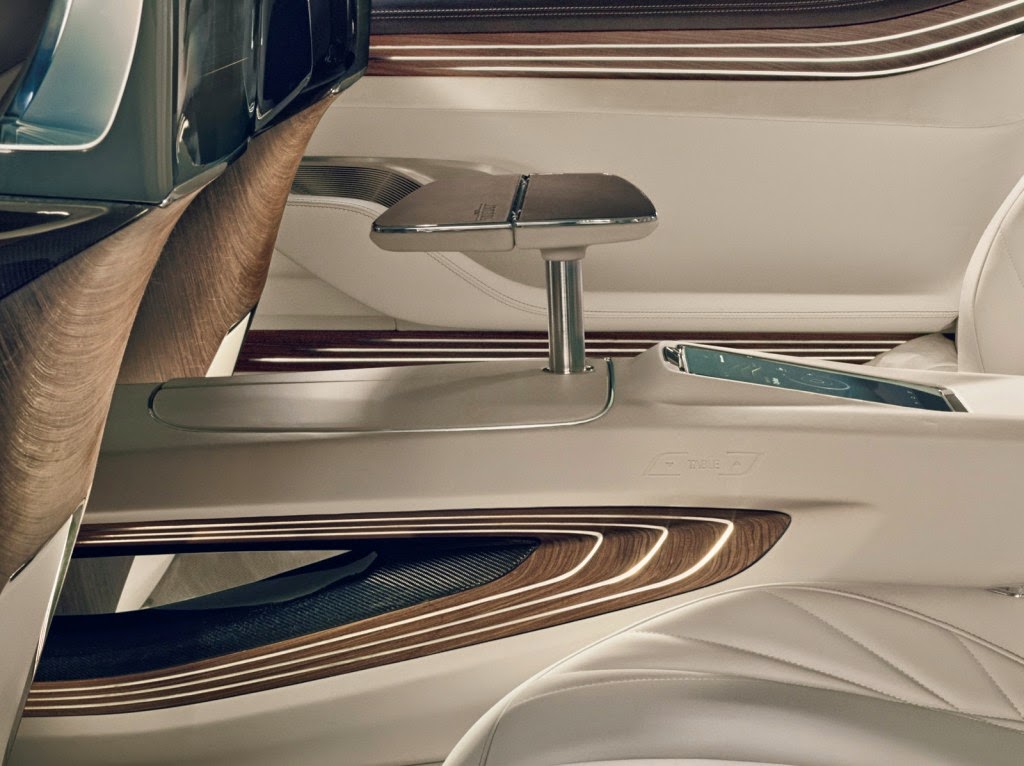