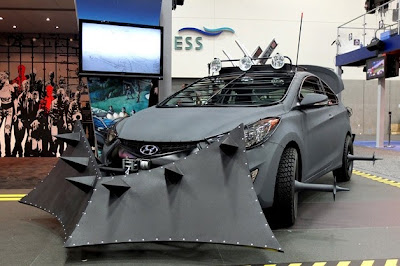 You've just got to admire a car company that feels secure enough about its place in the world to really swing for the fences in a marketing campaign.  Most automakers strive to align themselves with fairly conventional cultural activities, like Buick and golf, Mercedes and fashion week, or even Subaru and the X Games.  Hyundai, on the other hand, which is on a roll with great-looking cars, rising sales and great reviews, has embraced and its inner zombie and decided that designing cars for an apocalypse of the walking dead can help it reach a (presumably) desirable demographic….

Now, to be fair, they've also partnered with Prada to produce a particularly luxurious optional interior for a limited-edition version of the company's top-of-the-line Genesis luxury sedan, but that's a base hit in the scheme of things.
The outrageous, out-of-the-ballpark idea is called “Hyundai Undead.”  Last year, the company helped celebrate The Walking Dead’s 100th Issue at Comic-Con with Private The Walking Dead 100th Issue VIP Black Carpet Event.  They also partnered with Robert Kirkman’s Skybound imprint at Image Comics and, at the Comi-Con event in San Diego, unveiled a customized Elantra Coupe Zombie Survival Machine designed by The Walking Dead creator Robert Kirkman and fabricated by Design Craft.  They also gave away a Hyundai Elantra GT wrapped in the cover of The Walking Dead 100th issue by artist Charlie Adlard. 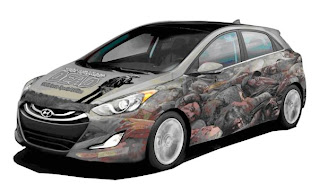 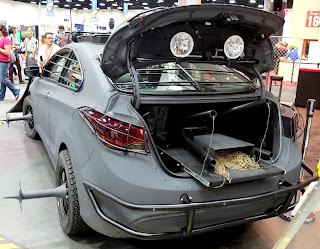 Design Craft Fabrication, owned by Gary Castillo, creates many of today’s top race cars, drift cars and display vehicles. As one of the leading car fabrication shops in Southern California, Design Craft Fabrication works closely with OE manufacturers and enthusiasts to design and develop authentic vehicles from bikes, planes, boats, engines, wheels or wings. Castillo was the technical editor of several auto magazines including Import Tuner and DSPORT. Most recently, his shop has built cars for Lexus, Scion, Hyundai, Mitsubishi, and many others. For more information, check out www.designcraftfab.com.

Clever stuff, you say… but that was last year?  What have they done lately?  Well, in the manner of all things these days, there's an app for that.  It's a free iOS app that you can get right now for your iPad or iPhone that lets you create your own Zombie Apocalypse I'm-going-to-run-your-undead-ass-over-with-my-car vehicle.  Perhaps not the most productive way to spend your time, but an entertaining break from Angry Birds or Farmville. 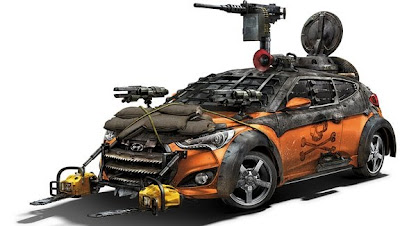 Not sure what Midas would have thought of Zombies, but it's for sure he'd know a golden idea when he saw it, no matter how strange.