A Flying Car For Kids.. Or the Kid in You
"B" Radio Control Quadcopter/Off-Road Racer 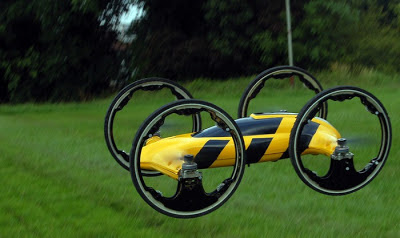 "They" have been promising us flying cars for decades, and if you skim through the technology blogs, you'll find some examples, none of them really very practical.  Terrafugia is probably the closest to a production model, having passed the required FAA tests for civilian use, and recently announced plans to construct a vertical take-off and landing model (VTOL).  But it's still a really ugly car with ungainly folding wings on the side.  UK-based product designer Witold Mielniczek, on the other hand, has built the prototype of an extremely cool flying car for kids… or for the kid in you.


Called simply the "B", his radio-controlled vehicle functions as both an off-road racer and 'quadcopter'… a sort of helicopter with four rotors.  In the case of his prototype, which is still in the process of crowd funding on Kickstarter, the props are cleverly housed inside the… driving rings (wheels to you earthlings), giving the B an intriguing sort of Transformers aspect.
The B features a tough polycarbonate body, with power being transmitted through the rear set of driving rings which function as wheels.  Each ring, instead of being mounted on an axle, as with contemporary cars (with a few exceptions), has a cog mechanism at the bottom of each ring, leaving the center open for the four 7-inch helicopter blades.  Everything is flexible, tough and removable, so it will tolerate repeated (and inevitable) crashing and bashings.
Power is provided by an 11.1-volt lithium-polymer battery, which reportedly provides up to 15 minutes of combined driving and flying per charge. Additionally, an onboard 720p video camera can record point-of-view footage to a Micro SD card.  Mielniczek has a working prototype, but needs to raise production funds.  As with so many entrepreneurs these days, he has turned to Kickstarter where a pledge of $484 will get you a ready-to-assemble B -- when and if the funding goal is met – or pledge $605 and get a fully-assembled model.
It’s a bit a gamble, and will take some time, but if you can wait to own the coolest toy in the neighborhood, click here. 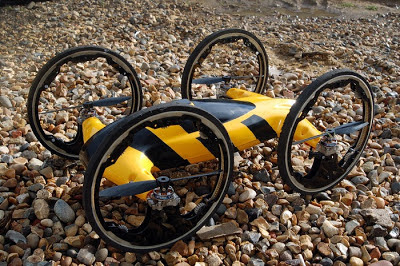 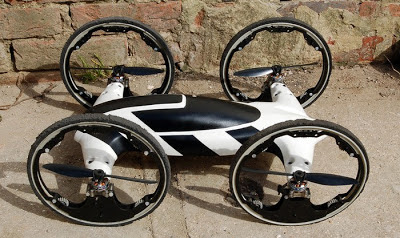 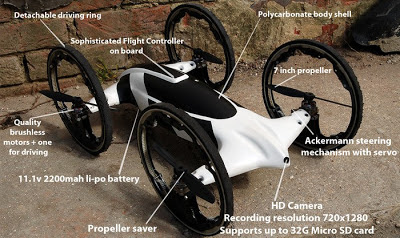 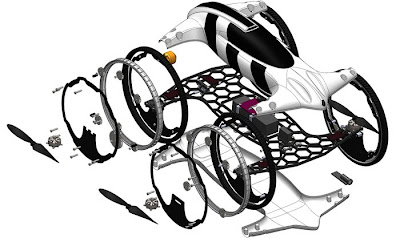