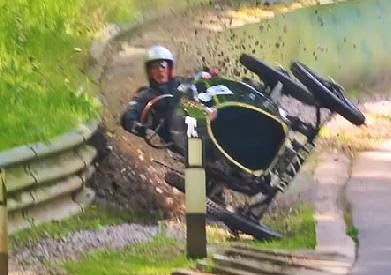 I started this blog with a story about a Bugatti, so it only seems appropriate that, however tardy, I continue down the Midas Road with some tales from both my history and recent events.  It wouldn't really be fair to say that the Midas Road is paved with Bugattis, but their contribution to the automotive pantheon are legend.  I mean, take a look at this photo.  If you were rich enough to afford a $400,000 car, not to mention going out and racing it, wouldn't this experience have tempered your enthusiasm?

If you look at the video, and how wide the tires are on this car (ever heard the old joke about racing legends being born when the drivers were fat and the tires were skinny?), he's probably only doing fifty miles an hour… but that's still his head halfway between a two thousand pound race car (really talented blacksmiths built these early race cars, remember) and Armco barrier backed up by a million pounds of dirt.  This is a 'rich man gets broken neck/killed racing antique car' story in the middle of happening.


And yet it didn't.  Edmund Burgess, of Lavenham, UK, pictured here participating in the Prescott Speed Hill Climb in Gloucestershire, UK in his 1924 Bugatti Type 13, was trapped under his car when it rolled over, causing him both considerable concern and approximately $400,000 in damage.  Fortunately, he was undamaged, and the nature of these cars is that, while it may cost that much to fix it -- which he intends to do in time for another hill-climb event upcoming in a couple of months -- you can never really destroy it.  It's so desirable that you could burn the car to the ground, but so long as the number plate survived, you could have a recognized Bugatti restorer (resurrectionist?) re-build it still have it be worth what it was before. 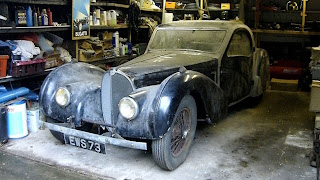 Bugattis also loom large in the lore of 'barn finds,' such as the one in which three cars were found in a hermit's garage, an Aston-Martin, an E-Type Jaguar and a 1937 Bugatti Type 57 Atalante Coupe.  Named after a heroine of the Greek mythology, Atalanta, it is this final car that brought joy to the hearts and wallets of the inheritors, selling for approximately $4.4 million.  And, interestingly enough, it was the car's original condition that helped contribute to its value, as there is a growing class of collectors who appreciate unrestored cars.  Not any old VW Beetle or rusted-out Chevy Nova, mind you, but cars like these, rare cars (the Atlalante was one of only 17, or so, built) with what the experts on the Antiques Roadshow would call 'patina.'
And it’s the back story that makes it all so charming.  The owner, Dr. Harold Carr (yes, Carr), who died at the age of 89 in 2007, bought the car for $1,800 in 1955.  Then he parked it in his garage for 47 years, ignoring the pleas of collectors knocking at his door and stuffing offers in his mailbox. 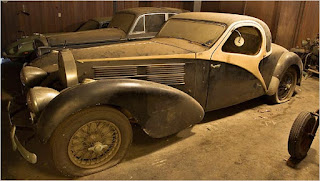 Nor is this the only example of 'barn find' Bugattis.  This one, also an Atalante, but a 1938 model, was found in upstate New York, and this one spent 70 years underwater in a European lake (perhaps a little too much 'patina' on this one?).  If you wonder what how on earth a Bugatti wound up in a lake, take a look at this video of exactly how it happens, on this time to a modern Bugatti Veyron… it has been suggested there was some... chicanery involved.

If the concept of such cars is of interest (and somehow they seem to keep emerging, as though there were a factory building dusty old classic cars and secreting them in barns) take a look at this story on Jalopnick about the ten greatest barn finds... to date, anyway.
Now that we've worked our way up to modern Bugattis (if you haven't seen my first Bugatti story for this blog, click here), I'm reminded of the first time I ever drove one.  I was living in Los Angeles at the time, editor of a long-gone automotive web site called CarDevotion.com, and when the phone call came offering the opportunity, I had to drive out to the Volkswagen design center (you may or may not know that VW owns Bugatti, and Lamborghini, and Audi, and Ducati motorcycles, among other things) out in the wilds of the Simi Valley.
There I was met by a cadre of executives and racing champion Butch Leitzinger, who, despite an obvious case of the flu, was to be my 'minder' during my test drive.  Bugatti never lets journalists (save perhaps the Editor of Road & Track) drive one of their cars alone, and Leitzinger drove us to a Shell station nearby that conveniently had a pump that dispensed 105 octane aviation fuel, which the early Veyrons required.  I was amused both at the $5.00 per gallon price tag and the assurance that such fuel was readily available to potential owners.
Butch and I spent the next couple of hours cruising the freeways, going up and down on- and off-ramps, looking for any opportunity to mash the gas pedal to the floor for a few seconds.  I think he was expecting me to be more circumspect with a car valued at $1.2 million, but truth be told, I've driven several cars worth that much or more, and the price tag didn't scare me.  The acceleration amazed me, I must say, but otherwise, it was a perfectly civilized car that just happened to attract enough attention to make me wonder if we had Tom Cruise strapped to the rear wing.
I've had two occasions since to drive Bugatti Veyrons, the most recent being at the Breakers Hotel here in Palm Beach, and I do believe I managed to put a scare – only half deliberately – into the director of marketing with a short, 120 mph slalom between moving chicanes on the I95.
Just two more items on my Bugatti list.  In speaking a few years ago with the head of Bugatti, he confirmed to me that it was not possible for any automaker, even Bugattin, to exist with only one product.  Hence, the proliferation of special editions of the Veyron, including the most current Super Sport.  But that kind of thing only goes so far, and all of us, even those of us who will never be able to afford such a car, are eager to see something genuinely new. 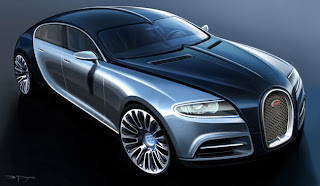 In late 2012, Bugatti CEO Wolfgang Dürheimer confirmed that his company is working on the production version of the 16C Galibier super sedan, due in 2015.  Under the hood will be a 16-cylinder, 8.0-liter, 2-stage supercharged engine producing something on the order of 1,400 horsepower.   Italdesign-Giugiaro, which is now part of the Volkswagen group, is working with Bugatti designers on a car that will combine carbon fiber and aluminum body panels to evoke both the classic Type 35 and Type 37 Bugattis.  The interior, designed to seat four, will be as luxurious and exotic as the current Veyron, utilizing the highest quality wood and leather, juxtaposed with an ultramodern LCD center console.  Price when production models appear is likely to be in excess of the Veyron's current $1.7 million. 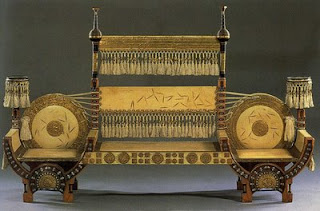 Since we've progressed to discussing wood and leather and exotic materials, it might be of interest to know that Ettore Bugatti’s father, Carlo Bugatti (born in Milan on 16 February 1856, son of the architect and sculptor Giovanni Luigi Bugatti) worked with ceramics, musical instruments, silverware, and textiles, but he is best known for his furniture designs.  He used inlays of exotic wood, copper and parchment in his designs as well as mother of pearl. In New York, the Waldorf Astoria’s Turkish Salon was furnished with Bugatti pieces and in 1900 his furniture was awarded the silver medal at the Paris World Fair.
Small wonder the Bugatti name is a fountainhead of legends and lore.
﻿