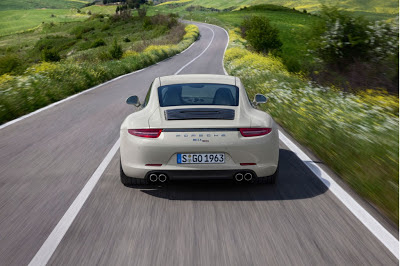 No matter how much of an expert you are, it's hard to know when a car is going to become a legend.  If you could, automotive journalists would be gentlemen scriveners, writing when the spirit moved them, parsing each paragraph like a Key West sunset.  But I've been doing this for thirty years, and I don't know anyone like that.  It is however, easy to tell when a car has crossed over into legend.  Look at the picture above for example; just from your experience with Porsches over the years and the little squiggle of asphalt up ahead, you can feel the road in your hands and the seat of your pants, tingle with the joy you are about to experience as this automotive legend marries you indelibly and forever to this perfect moment… and the one after that, and the one…
This particular automotive legend was born at the 1963 Frankfurt Auto Show when Porsche first rolled out its 901 prototype, a sports car designed by the grandson of Porsche’s founder as a replacement for the 356 model. The car would eventually be renamed the 911 and go on to spawn seven separate generations.  Now, five decades later, Porsche is celebrating the 50th anniversary of the 911 at the International Motor Show (IAA) in Frankfurt with a special anniversary model based on the 911 Carrera S.

Like the original 911, the 911 50th Anniversary Edition is a coupe with a flat-six rear engine and rear wheel drive. Its efficient performance, active sport suspension – and special body have current relevancy: the anniversary 911 features the wide body, which is typically reserved for the all-wheel drive Carrera 4 models. This special edition will be limited to 1963 cars, a number that represents the year of the 911 world premiere.

For the US market, the 911 50th Anniversary Edition will be equipped as standard with a Powerkit, which increases engine performance to 430 hp and includes the Sport Chrono Package.  The 911 50th Anniversary Edition sprints from zero to 60 mph in 4.2 seconds (3.8 with PDK) and can reach a top speed of 186 mph (185 with PDK). The limited edition models will be available at Porsche dealers this fall and will be priced from $124,100, not including a $950 destination charge.

Porsche will present the limited edition model in time for the 50th anniversary of the 911 at the IAA motor show in Frankfurt, which opens its gates to the public on September 12, 2013. In 1963, Porsche presented the original model to the public at this leading international show for the automotive industry. Since its first presentation – initially as the type 901 – the sports car icon has excited automotive fans across the globe, and today it is considered the reference for all other sports cars. Since making its debut in 1963, the model series has progressively developed without interruption. In the process, the unique character of the 911 was always preserved. The result of this evolution over a 50-year period – which included countless race victories as well – is a sports car that fully embodies the authenticity of the Porsche brand. Its DNA is reflected in all Porsche models.

This limited edition of the 911 Carrera S includes features that have contributed to the 50-year success story of the 911. For example, the limited edition includes Porsche Active Suspension Management (PASM) with special tuning to complement its increased track width and to add support to the exceptional cornering dynamics of the 911. The sport exhaust system outputs a fitting emotional sound. Special 20-inch wheels are a visual tribute to the legendary "Fuchs" wheels and are finished in matte black paint with machine-polished centers. Chrome trim strips on the front air inlets, the fins of the engine compartment grille and the panel between the rear lights emphasize the distinctive appearance of this limited edition model. Another technical highlight of the car's equipment is the Porsche Dynamic Light System (PDLS) with bi-xenon headlights and dynamic cornering lights.

Two unique colors are available for the anniversary 911, a darker graphite grey and a lighter geyser grey metallic. In addition black monochrome is also available. Each of the cars has a two-tone 3D-effect badge on the rear lid with the numbers "911 50". This is repeated in three color embroidery on the headrest and in two colors as a logo on the tachometer and the aluminum door sill plates. It can also be found on the cup holder panel together with the limited edition number of the individual vehicle. Other exterior characteristics of the special model are high-gloss window frames and sport design exterior mirrors on the doors panels.

There are tributes to the original 911 in the interior as well: green labeling on the instruments with white pointer needles and silver caps on the instrument pivot pins, just like 50 years ago. Another special feature is the center panels of the leather seats, which are designed with a fabric pattern reminiscent of the "Pepita" tartan design from the 1960s. The full-leather interior is designed in agate grey or black with decorative stitching, some in contrasting color. The driver and front passenger experience typical 911 driving fun in 14-way sport seats or optional 18-way sport seats plus. The gear shift or selector lever – which matches the decorative panels on the dashboard, doors and center console in brushed aluminum – comes from the Porsche Exclusive program.

The cars will be available in dealerships this fall, priced from $125,050.  With only 1,963 examples being built for worldwide consumption, it takes no special gift of precognition to know that he who hesitates will have lost his chance at a new legend in the making. 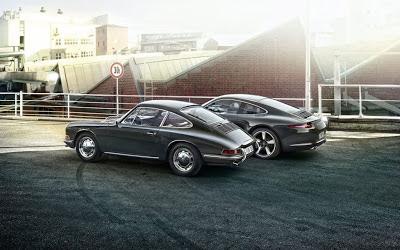 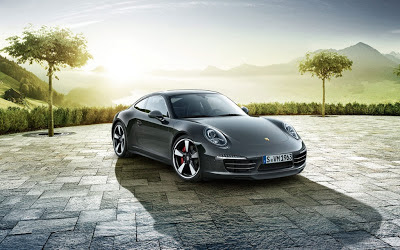 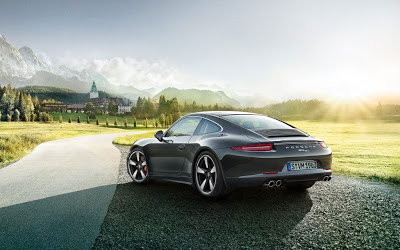 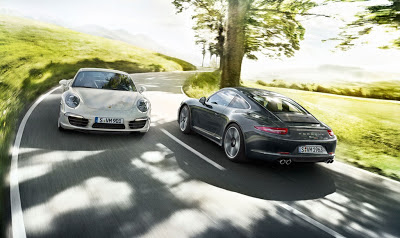 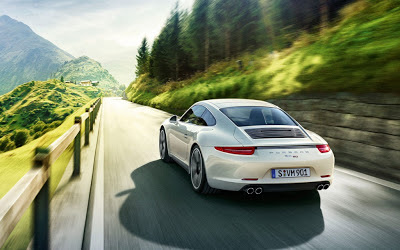 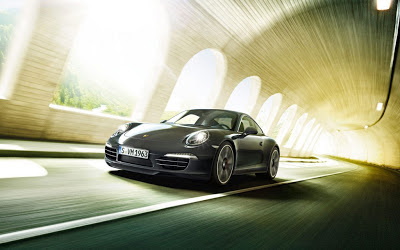 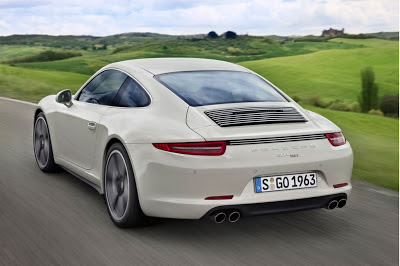 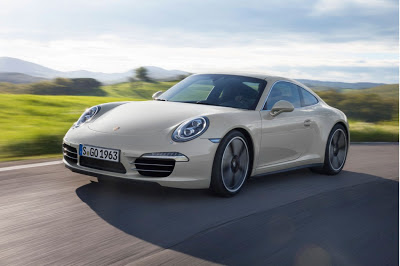 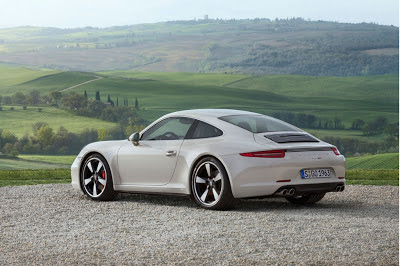 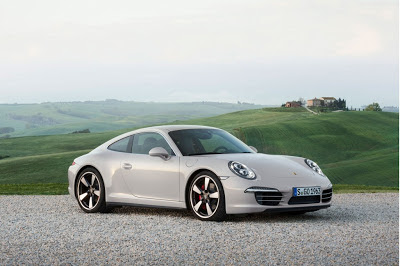 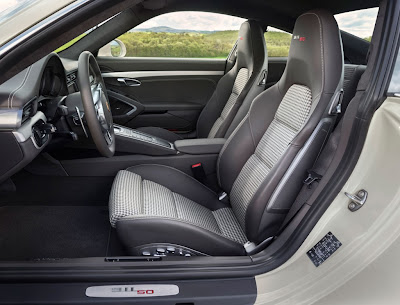 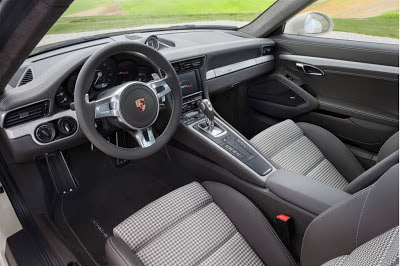 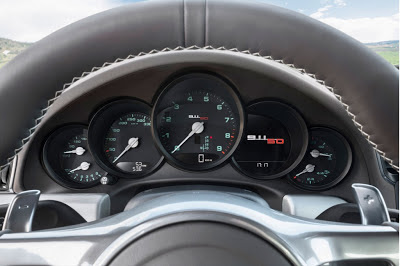 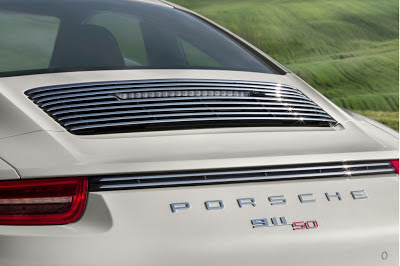 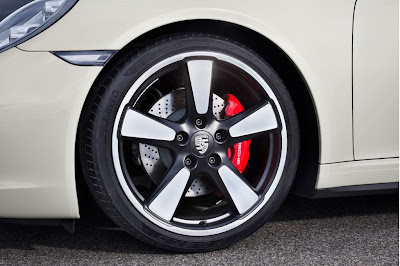